It was an image of a newspaper front page. The newspaper cover was empty sans the two-word headline that simply read “I’M BACK!!” The following image was a replica of the 1995 Press Release that sent shockwaves around the world when Michael Jordan announced his return to basketball. In Hella Yella’s case, he was announcing his return to the Austin airwaves.

SO WHAT PROMPTED HIS RETURN?

Me – and divine intervention perhaps.

Back in August, I was assigned to interview the new KAZI team and talk about the new direction. I remember the Station Manager, James Davis, mentioning he and his teams were interested in having new programming. At that time, I had just begun working as a publicist with DJ Hella Yella, and after a month or so, I really began to notice his work ethic. He averages at least 10 -15 gigs weekly. He travels for shows from Houston, Dallas, San Antonio, even Colorado. He does his own marketing which is a great mix of information, HBCU reppin’, funny memes, promotion, supporting other DJs and Tastemakers, as well as his philanthropic efforts.

Hella Yella is a movement by himself.

He even curates his own events (see his Meme Party, Drake Brunch, annual Halloween Party, and more). I quickly realized while he’s regarded as a DJ, he’s also a curator; a strategist if you will. After having worked with artists for years, one can spot who’s serious about their craft. And Hella Yella is a movement by himself.

Following my meeting with KAZI, I called Hella Yella up and told him, “Hey would you ever consider coming back to radio?”. There was a pregnant pause. Many may remember him on another Austin radio station two years ago. It wasn’t the best experience for him. Spinning the same Top 40 pop songs with a sprinkle of R&B and a dash of Hip-Hop didn’t speak to who he was as a DJ and lover of various music genres.

And when that previous station wanted to go in a different direction, they pivoted without him leaving him to pick up the pieces. I could hear the hesitance in his voice when he replies, “Radio where? I don’t know man.” I explained that I would like to pitch him to KAZI. I informed him that they were in a rebranding phase and wanted new programs.” He reluctantly responds, “Ok. I’m open but it has to make sense.”

The challenge was accepted. I had to make it make sense to everyone. Game on! So I emailed KAZI’s Program Director, Abdi “AJ” Jones and introduced DJ Hella Yella, and attached his EPK with his stats. I discussed how working with him was a mutual benefit for both parties as the station can stand to have a show that focuses on Hip Hop and draws a millennial crowd.

And who better than the person with his ears to the street, packing out shows in every venue with his set? A meeting was scheduled days later. They met and he walked away from the meeting with a Friday show beginning December 3rd at 7 pm on KAZI FM 88.7. He teased his audience once more with his caption on Instagram. 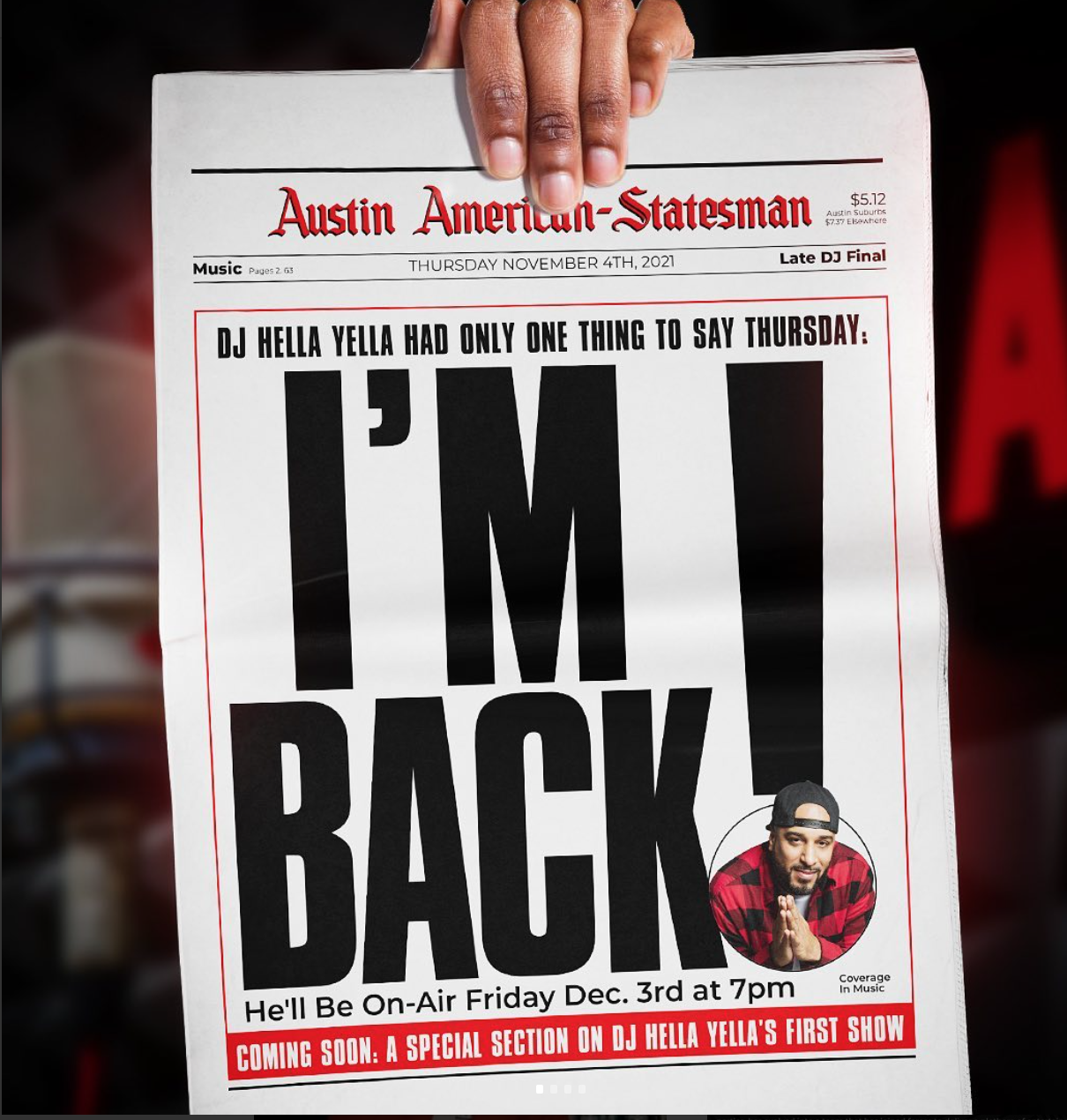 This time around I’m going to show you what the radio is supposed to sound like in Austin. I’m doing everything I wanted to do but wasn’t allowed to on that other station.

His announcement further stated “You are going to get THE REAL me, not that watered-down BS pop version that was on the radio before! I’m not playing any Halsey or Ariana Grande this time around! Get ready Dec 3rd at 7 pm cause I’m talkin’ my s**t from jump!”

As far as what KAZI has planned for DJ Hella Yella, “I want to get him syndicated. He should be in multiple markets. It’s definitely doable.” said Jones. Hella Yella has yet to do his first show and the station has honored his request and given him five days a week. “I know talent when I see it. I know how he was treated before. That won’t happen here.” He adds, “They missed out. Come join the Yella Experience. People really missed out. But if you didn’t get him by now, he’s home.”

THE YELLA COLLECTIVE AND MORE

The November 4th announcement was the tip of the iceberg for Yella. The following day, he had a launch party for his entertainment company, The Yella Collective. The company will allow DJ Hella Yella and his team to seamlessly work under one umbrella to provide business and entertainment options for multiple areas. His team will assist in everything from providing promoters to content creators, bottle service specialists, street teams, dancers, and more.

I am no longer shrinking myself down to fit in anymore! I’ve done all the work, paid all the dues.

The launch wasn’t without hiccups as the host, unfortunately, had to cancel. But in true strategist fashion, The Yella Collective team pivoted and focused the launch on local entrepreneurs and creatives helping to move Austin’s Black Cultural scene. Jermaine and Jahmaal Dumas, owners of the popping hang out, Down South Cajjun Eats, were in the building to celebrate their birthday; along with fellow events curator and owner of Encore ATX Events Brandon Thorton. The city definitely came out and showed the team love and support for Yella’s vision.

TALK TO HIM NICE!

His latest announcement came on November 9th. The Huston-Tillotson  University Alum became a member of the Capital Metro “MetroArt” Committee. The committee supports MetroArt by advising on Capital Metro art projects, processes, and connecting with the community.  In his words, “I don’t just DJ and curate parties. The bigger picture of DJ Hella Yella & The Yella Collective is to make more opportunities for the creatives and for the culture.” DJ Hella Yella understands that his brand provides visibility to so much more than music. And having a seat at the table will allow him to represent so many who don’t have a seat at the table. “I am no longer shrinking myself down to fit in anymore! I’ve done all the work, paid all the dues, I’m that guy…and you’re gonna treat me like I’m that guy. Humbly, and respectfully!”