July 27th 2021 marked the return of Blues on the Green at Zilker Park. The ACL Radio production is back in person after being pushed online in 2020 because of COVID-19 concerns.
0

The lineup was curated by Austin’s own Gary Clark Jr. and featured artists like Jackie Venson, The Peterson Brothers, and Blackillac — a notably diverse mix of artists following public criticism last year from Venson, who charged festival producers to be more attentive to including Black artists on their tickets.

In a series of tweets on June 2, 2020, the R&B/Soul artist Jackie Venson aired her frustrations about Austin’s music scene to the world: “HEY,  instead of being silent, today I’m going to demand that my city, Austin, Texas, be better.” She continued, “I hope you still believe Black lives matter when you’re choosing your lineups for major Austin concert events & festivals when you’re picking out music and songs for your radio shows when you’re doing artist spotlights.”

Jackie first voiced her concerns a week after the death of George Floyd. At the time, many allies were changing their social media profiles to black squares and hashtagging BLM. A year later, I wonder how much of that activism was performative and who really took the grievances of marginalized people to heart. 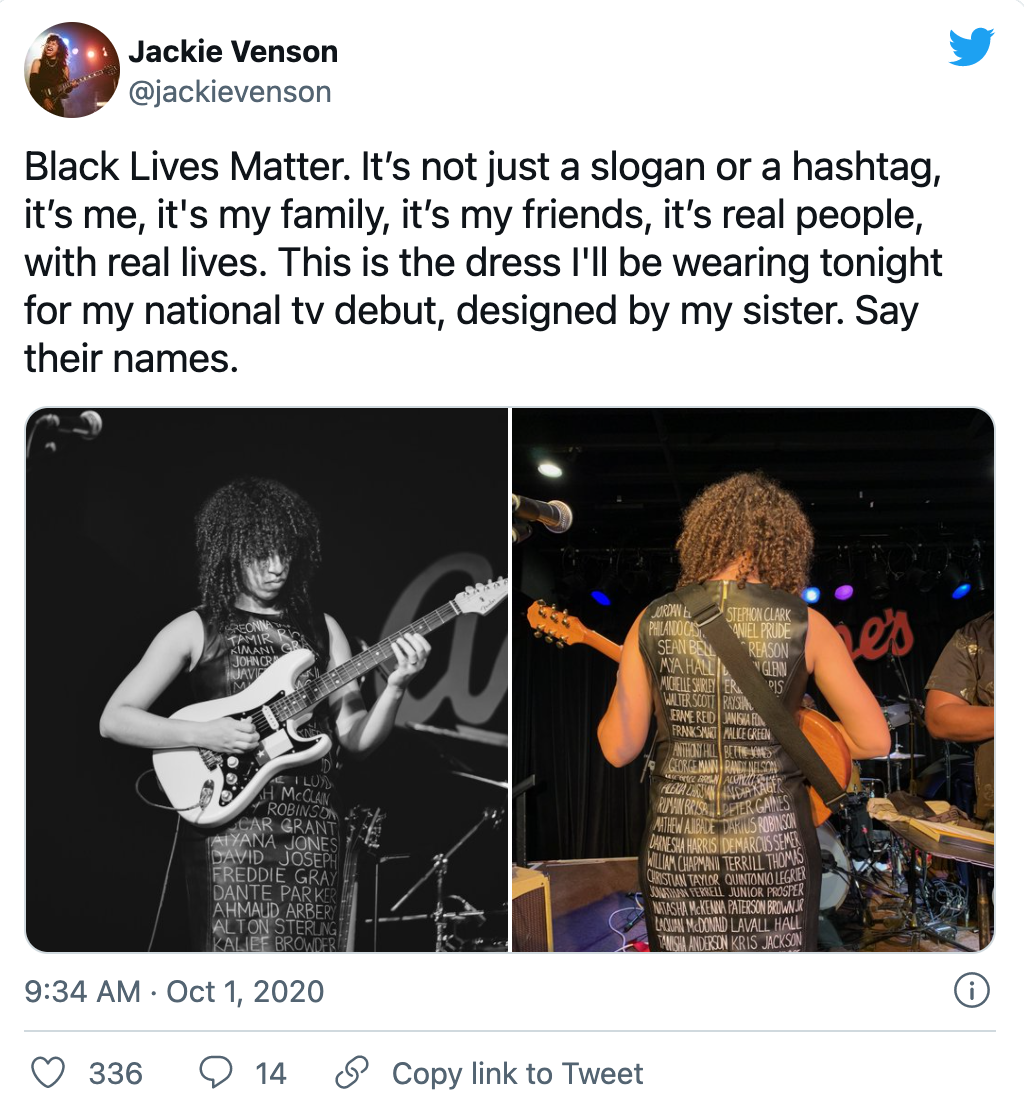 A two-time “Best Guitarist” winner of the Austin music Awards, Venson, stepped front and center to recognize the discrimination her peers were facing in Austin’s music scene. Not only did she identify the problem, but she was also demanding change. Venson doubled down on her remarks in the months that followed. She rejected an offer to perform for Austin City Limits, considered by many to be the Holy Grail of performing gigs because she wanted to see a more diverse line-up.

Shortly after, people began to echo Jackie’s feelings and offer their perspectives of the racial disparities in local music. Then something happened. The Blues and Soul singer announced that while she opted out of performing for Blues on the Screen, the virtual version of the storied Blues on the Green event, she would curate the event’s line-up. The live-streamed concert would serve as a fundraiser supporting E4 Youth and the Central Texas Food Bank.

Her lineup featured local acts Alesia Lani, Kydd Jones & Bomani Ray Barton, Sam Houston & Blk Odyssey, and Miss Lavelle White. ACL Radio had listened to the music community and Jackie Venson delivered. Aaron “Fresh” Knight, cohost of KUTX 98.9 “The Breaks” Show and one of the leading black music tastemakers says, “I think Jackie calling out ACL Radio for lack of diversity of Blues on the Green was great. It was something that needed to be said and done, and done by someone with Jackie’s stature and position in the music scene.”

Venson’s words and actions seemed to ignite a flame in all the local music lovers to carry the torch and have these uncomfortable but necessary conversations. A movement for advocacy and equity for artists of color in the Austin music scene has taken form. Organizations that provide more equity and diversity like DAWA, Future Front (Boss Babes), and Brown State of Mind have taken up the torch and are getting more support to offer amazing events exhibiting Austin’s vibrant arts and culture scenes.

Criticisms from local musicians and allies in the music community are now championed on a governmental level. The City of Austin’s Music Commission, led by musician and advocate Jonathan “Chaka”  Mahone, has begun pushing for spreading the wealth of funds, resources, and opportunities for musicians of color in the live music capital of the world. As the only Black commissioner and chair of the AMC, Mahone says he’s working hard to bring equity and opportunity to BIPOC and LGBTQIA+ artists in the city.

“In October (2020), I presented the Preservation Innovation Elevation (PIE) guidelines to the Music Commission, and we voted unanimously to contribute 50% of Live Music Funds to BIPOC musicians and promoters. On July 12th, 2021, the Economic Development Department shared its guidelines based on the feedback and vote received in October.  Under the current direction, historically underrepresented groups will be the priority of Live Music Funding.”

In a city with a history of dismissing the black contribution to its weirdness, its art, and the overall culture of Austin, many are relieved to see some progress is being made.

You can check out the diverse line-ups through August 11 at Zilker Park.