In Gary, Indiana more than three-fourths of the population is Black, and one out of almost every 3 residents in the city lives in poverty. Local churches have stepped in to fill the gaps, establishing community gardens and food pantries and helping to meet the basic needs of city residents where public service programs fall short. Such was the case for the church Ebonie Trice was raised in, she remembers
0

In addition to a food pantry, the church also housed the homeless in a shelter in the building and collected and distributed clothes and furniture to those in need through various community partnerships. She didn’t know it then, but her mother’s dragging her to volunteer at church would go on to lay the foundation for her life’s work in adulthood.

“As a kid, you just do everything your parents do,” she says. “Once I left home, I said ‘ok, that’s in the past.’” But it wasn’t. Trice left for college at 18, and the only thing she was really focused on was “getting out of my mom’s house.”

She majored in computer technology, chasing what was said at the time to be one of the most lucrative career paths one could pursue. But she couldn’t shake the desire to serve others. Even though she wasn’t volunteering as much as she had in her younger years, Trice was still committed to helping people.

She decided that helping people was her mission, not being a computer technician, so she dropped out of college and in February 2011 followed her younger brother to Austin. “I was like, ‘I’m coming,” she remembers saying at the time. “I came here for a week and found a job and an apartment.”

there’s such a need here to help the homeless

She never even started the job, which was in a Sears call center in Round Rock. Instead, she arrived and was offered another job at the Hospital at Westlake Center. But it was enough to anchor her in Austin, near her brother and sister-in-law.

And soon the desire to start volunteering again hit. She discovered “there’s such a need here to help the homeless,” she says, and she worked with local organizations to determine the greatest need.

“Laundry was one of the things that were inconsistent,” she says. “It’s easy to do, but lots of people don’t have it.” She initially founded Mission Accomplished on the backs of “laundry angels” – individuals who volunteered to take laundry to the local laundromat or home to do a few loads.

It’s easy, she says, to throw in a load while you’re working or doing other things around the house. It’s a low-level lift with a high impact on the beneficiaries.

“When you look good, you feel good – so to offer that to individuals, we wanted to be able to offer that,” she says. “People can’t even go to an interview without clean clothes. We might not be able to meet every need, but we can meet a need.”

Today, Mission Accomplished operates as a mobile laundry center that parks in locations that are already offering other services to the homeless so people can get multiple needs cared for at the same time. “The goal is to be able to take the trailer to different locations, but also provide a resource center where individuals can come in and train for an interview, prepare, get clothes, dental and health checkups and resume prep,” she says. “They can’t go from point A to point B all the time.” 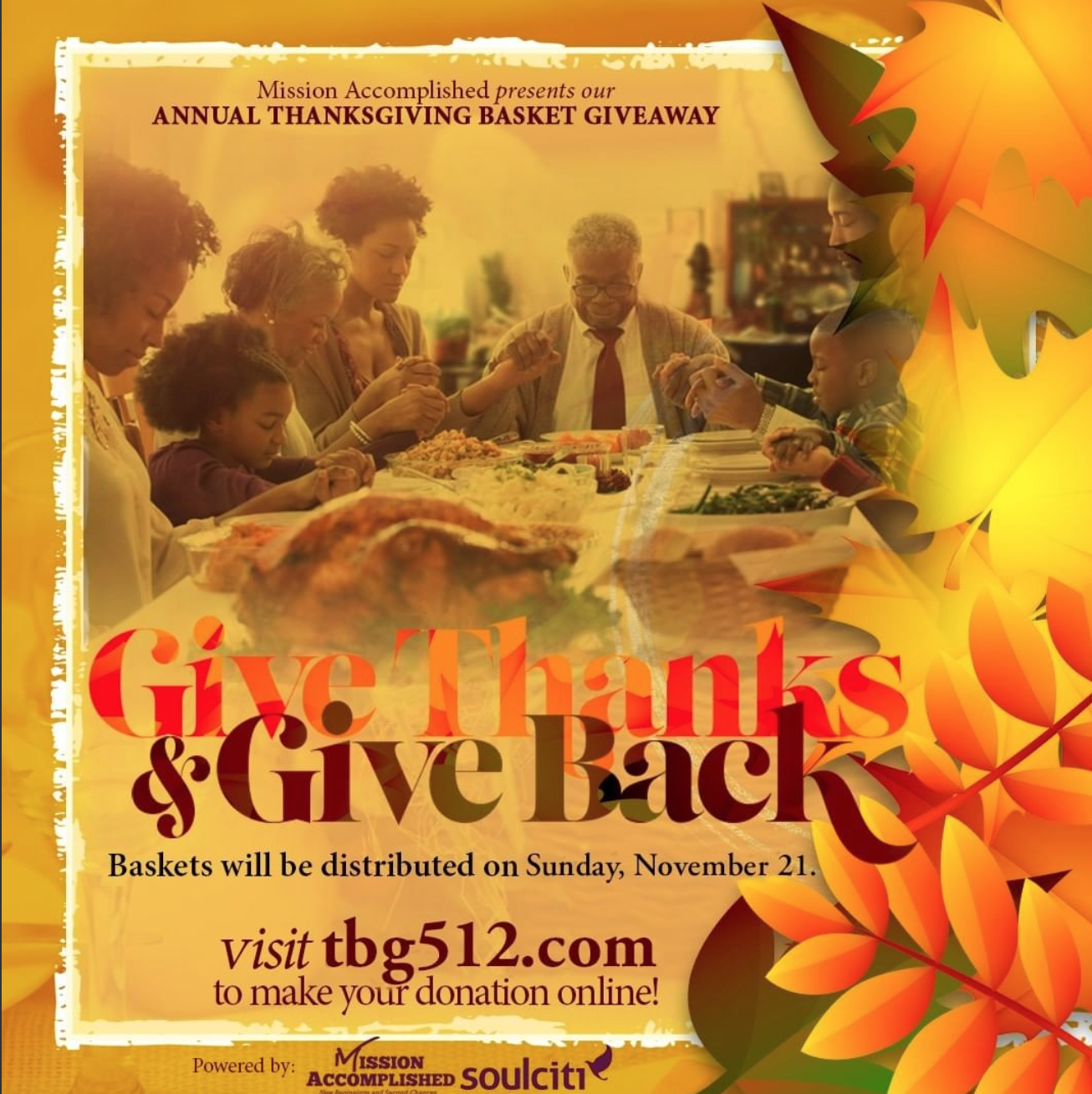 In addition to their primary mission of washing clothes for the homeless, since 2015 – Mission Accomplished has conducted an annual Thanksgiving Basket Giveaway. They raise enough funds and collect food donations that enable them to feed over 200 families for Thanksgiving. The food giveaway originally began as a partnership with The Steve Harvey Morning Show back when the show aired in Austin. Trice is currently accepting donations for this year’s giveaway.

And as if her plate is not full enough, Trice is also heading back to school – all while working to scale and grow Mission Accomplished and working a full-time job. This time, she plans to study social work.

“When I was 18 and went to college, I was more-so focused on getting out of my mom’s house,” she says. “Now I have experience. I’ve worked for over 20 years, so all of those things play a role. I look at school differently.”