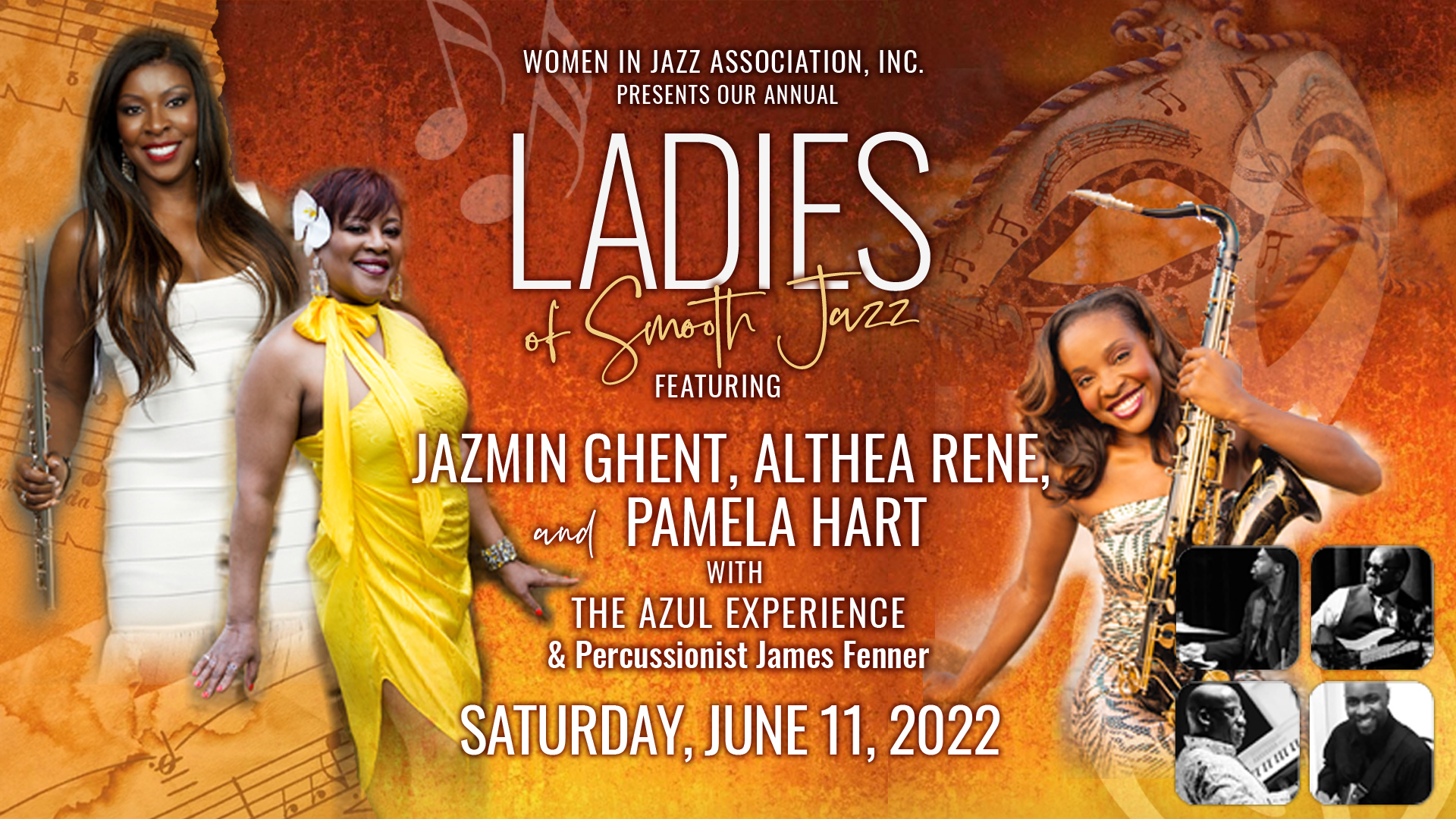 The Ladies of Smooth Jazz concert features international smooth jazz and gospel recording artist Jazmin Ghent,  the “Flawsome” flutist Althea Rene, and Austin’s Lady of Jazz Pamela Hart.  These talented musicians will captivate you collectively and individually.  Each dynamic performer delivers a mixed genre of jazz, soul, R&B, and funk.  Presented by Women in Jazz Association, Inc., these ladies, supported by The AZUL Experience and percussionist James Fenner, are going to tell the whole story and take you on a fantastic musical journey.

This project is supported in part by the Cultural Arts Division of the City of Austin Economic Development Department and a grant from the Texas Commission on the Arts.

Jazmin Ghent is a national smooth jazz and Gospel recording artist and an accomplished music educator.  She was awarded the prestigious 2019 NAACP Image Award for Outstanding Jazz Album, “The Story of Jazz.” She was also nominated for the 2019 Smooth Jazz Network’s Best Artist of the Year and was voted 2017’s Best New Smooth Jazz Artist.  Jazmin is also an accomplished music educator having taught elementary school music and lead workshops for youth and adults in the US and Haiti.  Jazmin has four Billboard topping singles, “Amends,” “Work Wit It,” “Heat,” and “Compared to What.” All played in rotation for several months on Sirius XM Watercolors.  Jazmin has performed at various major festivals and venues throughout the US and Europe and recently on the 2019 Dave Koz Cruise to Australia.  She holds a BA from Florida State University and MA from Tennessee State University.  Stay tuned for more from this rising star! Here is Jazmine Ghent performing “Natural Woman.”

Flautist and band leader Althea Rene is a dynamic, soulful performer with a bent toward contemporary jazz, funk, and instrumental R&B. A native of Detroit and daughter of trumpeter, saxophonist, and longtime original Funk Brother Dezie McCullers, Rene grew up in a musical family. Encouraged to study music from a young age, she eventually enrolled in a classical music program at Howard University in Washington, D.C. However, while at Howard she discovered her love of jazz, and eventually returned to Detroit. Along with her albums, she has made numerous festival appearances, including dates at the North Sea Jazz Festival, Austin Jazz Festival, Norman Brown All-Star Jazz Cruise, and others. In 2013, she signed with the Trippin ‘n’ Rhythm label for the Michael Broening-produced In the Flow. Buoyed by the singles “Sunday Cruise” and “Free,” it peaked at number one on the Billboard smooth jazz chart. Two years later she delivered the concert album Live in Detroit, showcasing a well-received performance at the Detroit Public Library. In 2018, she published the book Becoming Chocolate Barbie: A Guide for Professional Women in the Music Business. In 2019, Althea issues her eighth studio album “Flawsome” indicative of the performance we will hear!  Here is Althea Rene performing “Free”

Pamela Hart is highly regarded as one of Austin, Texas’ finest vocalist.  She is noted by Austin Women’s Magazine as “Austin’s First Lady of Jazz.” Pamela and her husband Kevin Hart produced (and she has performed in) the semi-annual Women in Jazz Concert Series—the greatest event for female jazz musicians in Texas—1994 to date.  Pamela was also inducted in the Austin Jazz Society Hall of Fame in 2018. Professional, unique, & captivating — Pamela Hart performs locally, regionally, and nationally for Concerts, Festivals, Weddings, Corporate Events, Banquets, & Night Clubs. She has repeatedly opened shows for, and shared stages with, many popular artists including Miss Nancy Wilson, Dianne Reeves, Nat Adderley, Jr., Kirk Whalum, Rachelle Ferrell, Norman Brown & Richard Elliot.  Sheltered but not stifled during covid-19, Pamela hosted livestreaming House Concert Series almost every Sunday in conjunction with the Women in Jazz Association, Inc. on Facebook from March through December 2021.  She also participated in the Austin Jazz Society’s Project Safety Net, a fundraiser to assist local musicians with financial hardship. Nothing has stopped Pamela’s passion to perform jazz and keep it alive! Pamela’s CD, Happy Talk, released on May 1, 2021.  Here is Pamela Hart performing “The Best is Yet to Come”