Fran Harris (2021 Best in the Citi Finalist) has always had a way with words. As a young girl growing up in Dallas, she participated in church productions, excelled in oratorical events, won spelling bees, and performed a monologue from Ntozake Shange’s “For Colored Girls” as a teenager. This summer her latest work, Rapper’s Delight, which she wrote, produced, and will direct, tours the country including a stop in Austin at Akins High School, Saturday, August 28, 2021 at 7:00 pm.

“I’m thrilled to bring “Rapper’s” to Austin,” said Harris. “So much of what I’ve become and achieved started at UT.”

Harris was a standout basketball student-athlete at South Oak Cliff (40-0 UIL state champion) before landing a full scholarship to the University of Texas at Austin where she led UT to a 34-0 NCAA Championship title in 1986, playing for Hall of Fame coach, Jody Conradt.

Harris earned two Journalism degrees at UT, and an MSTC degree from UT’s McCombs School of Business, followed up her college sports success on several U.S.A. national teams and was named an alternate on the 1988 U.S. Olympic team. In 1997, she played on the WNBA’s first championship team with the Houston Comets, followed by one season with the Utah Starzz. After retiring from the WNBA, Harris became a sports announcer for ESPN, FOX, and other cable outlets, where she cut her teeth in the television and film industries. 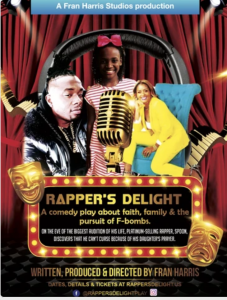 Rapper’s Delight is a faith-centric comedy about Devion “Spoon” Weatherspoon, a gangsta rapper who discovers that he can’t swear or objectify women after his daughter, Delight, prays a special prayer asking God to remove those words from Spoon’s arsenal. Comedy ensues when Spoon, played by Dallas rap sensation, Quincy Bradley, gets the chance to audition for a Hollywood movie producer, but can’t deliver the rhymes that have earned him platinum status.

“What I love most about Rapper’s Delight is how authentic it is,” said Bradley. “Fran’s captured the essence of not only the rap game, but also the family dynamic, and how relationships can suffer when we forget where we came from.” Along with Bradley, the play features a mostly all-Texas cast including Houston’s Sydney Russell, a 9-year old actress who, this Fall, will star on Broadway as young Nala in The Lion King.

“I’m really blessed to have attracted such amazing actors who bring my words and characters to life,” said Harris, who’s also producing “A League Of Our Own” the first documentary about women’s professional basketball in the United States.

For tickets and details, visit the website.  Groups of 10 get automatic $5 discount per general admission ticket at checkout.