Festival season is upon us and Austin is coming back with a bang!
0

After a two-year hiatus, SXSW kicked off things on March 11th and it was a whole vibe the entire time! Many people wondered about the look and feel of the festival’s return with the company having gone through an acquisition. This year’s comeback was a little different. SXSW 2022 had a significantly smaller footprint,  fewer events presented, and fewer wristbands were sold. However, it may have worked in SXSW’s favor, as it had more of a “local” feel with so many Austin-based businesses and creatives front and center. There were several events, official and non, curated by Black Austin-Based creatives and allies as well. DAWA, Future Front Texas, Brown State of Mind (BSOM), Of Color, and Origin Studio House planned amazing events, just to name a few. But it was that fateful Saturday, March 19th, that was the cherry on top of the week. Hennything Fest returned to Austin after its pandemic pause and reminded everyone that Hennything is in fact possible.

On February 1st, I got a call from DJ Hella Yella. He informed me that Hennything Fest was returning and they were in need of a new location. Their previous location was under new ownership and no longer an option. He asked if I could help them find a new location. The organizers wanted to host the event on the last Saturday of SXSW, the most popular day for SXSW’s music leg. Like a madwoman, I agreed to the task having no idea where we’d find a place a month before one of Austin’s largest festivals. Not only was there a lack of time and available spaces, but frankly, Austin can still be discriminatory of large predominantly Black events/crowds, outside of Juneteenth of course. I knew there could be that stigma there as well. So we had our work cut out from us.

After getting several quotes for some popular locations that were outrageously priced might I add, I still had nothing. I received a call from Jordan Cummings, one of the main organizers, who stated he’d be traveling up from Houston to check out the spaces I was considering the following week. Based on the marketing and promotions timeline, I had to come up with something quick. And then it dawned on me! Why am I looking west of IH-35 trying to convince others to allow something for my people, my culture? Having some experience with historic preservation, I know how important it is to preserve and reclaim Black spaces. When we don’t occupy spaces that cater to us, we tend to lose them as others believe we don’t value them. With the gentrification rampant in East Austin, the transplants, and out-of-towners asking “wHerE aRe aLL THe Black PeOPLE in Austin?” I knew what I had to do. I took a ride on the East Side and went back to the drawing board.

Huston-Tillotson’s Downs-Field, Givens Park  Parking Lot, and the Millennium Youth Entertainment Entertainment Complex were my top three choices. When Jordan and Ta, two members of the planning team, arrived to look at the locations, I explained the pros and cons of each location as the team listened intently. Something about the Millennium just felt right to me; the Hennything team felt the same. So with their permission to move forward, I reached out to Ms. Gwen and the Millenium team and after some negotiating, it was set! I knew the hard part wasn’t over. I agreed to help the team with some additional promo and marketing as well as I knew the hard part was yet to come. Now we had to convince people to come. To choose Hennything over SXSXW’s Rollingloud festival, the other shows that were happening with big-name acts, and the naysayers who couldn’t see the vision of how this could happen at the Millennium.

It was Afropunk meets a Juneteenth celebration. It was the Tip Drill video meets the Right Thurr video. But the edited version, not the BET Uncut one. Logistically, Hennything was solid.  It was well staffed with a friendly, organized team, who were having just as much fun as the attendees. It featured well-known DJs from various parts of Texas including Austin’s own, DJ Hella Yella, and Houston’s DJ Mr. Rogers. There were local Black vendors with amazing reasonably priced food. Crawfish, fried catfish, nachos, funnel cakes, chicken wings, and Henny Ice cream were just some of the options to choose from. There were guest appearances from rappers Lil Jairmy and Trae the Truth. The Cinema Anywhere Austin robot even showed up and hyped the crowd. But most importantly, it was safe. There were zero incidents in a crowd of over 6,000.

My favorite memories of Hennything Austin 2022 consist of seeing people I hadn’t seen since high school, Swag Surfin in the crowd, and watching grown people sing their hearts out to Kirk Franklin’s “Stomp.” The organizers, a group of four millennial, Black Men from Houston (Jordan Cummings, Ta Whitmore, Robert Wright, and Antonyo Johnson) did their thing. I may have underestimated their laid-back, cool, collected nature initially, but they are not to be taken as anything less than professional, business savvy, entrepreneurs. I teamed up with them to offer marketing, promo, and location scouting. After deciding on the Millenium Youth Entertainment Complex, I watched the team put their heart and soul into its comeback.

Hennything put on for the culture

Hennything managed to have people pay for an experience blocks from 6th street during the height of one of the most popular festivals in the city. They partnered with a historically black space in the historically black neighborhood. There was no wonder where the Black people in Austin were on March 19th, 2022 from 7 pm – 10 pm. Because Hennything put on for the culture. There’s no doubt that when done right, with intention, and love, we will show out. 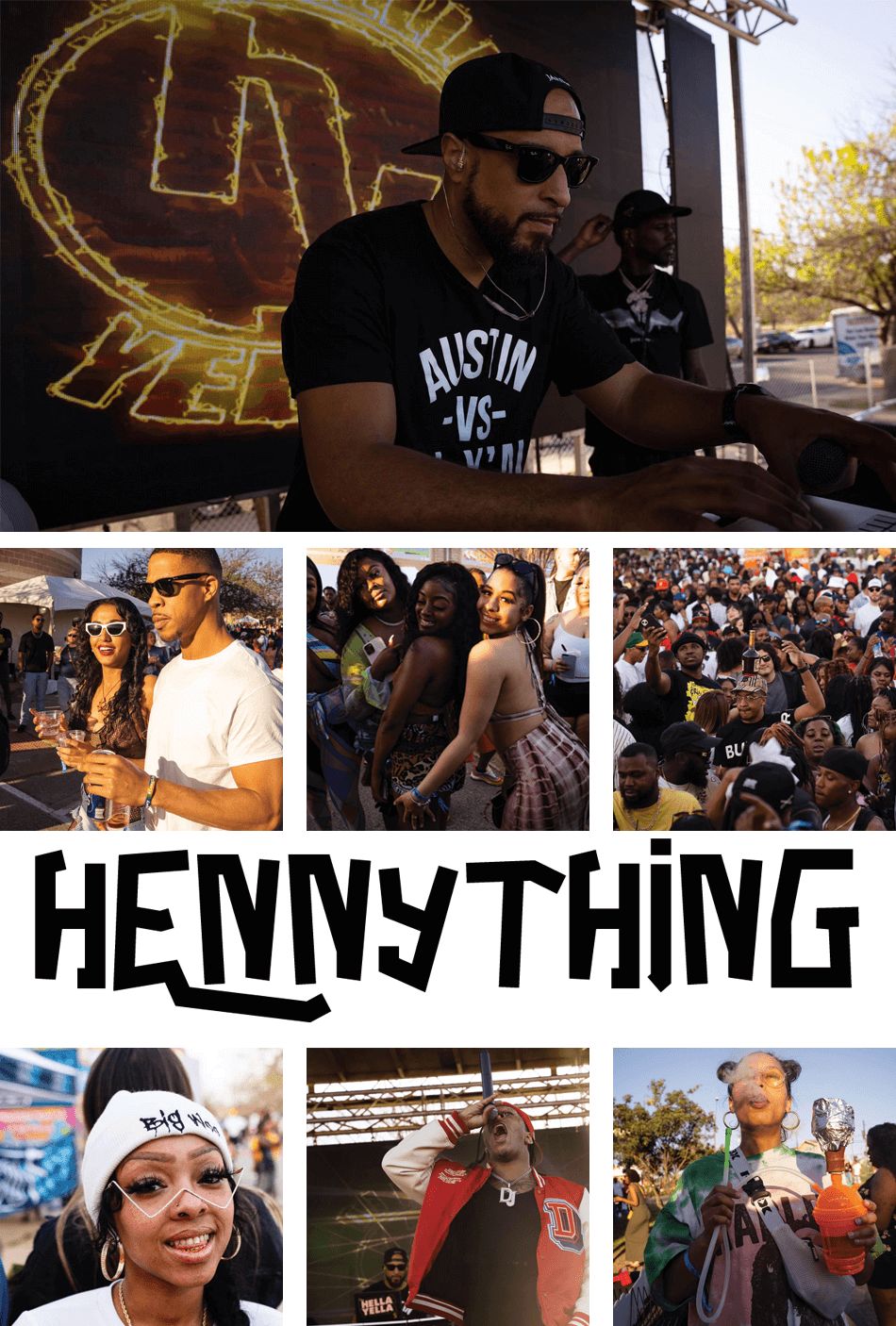 Hennything is back and better. And if you want to catch the next one, they’ll be back in Houston, where it began for them, as they celebrate the anniversary of the festival on July 2nd, 2022. As for some additional upcoming events and festivals in Austin you should definitely check out: