Standing 6’6”  tall, Austin’s new fire department chief does not sound or look like a ‘typical’ Austinite. Our city is pretty white. And, according to some reports, pretty highly educated. Have a chat with Chief Joel G. Baker. Listen to him talk.

His relaxed, almost familial, down-home-southern style of communication will land in stark contrast to the more measured, dare we say ‘common’ articulation we’re used to hearing from our city leaders.

The native of Atlanta, Georgia will communicate with you in a way that represents one outcome of growing up black in the deep south, challenged by the American education system. At first, you’ll find you have to really pay attention to keep up; Chief Baker’s verbal cadence is swift, then slow. His voice settles you — quiet and calm — then, it buoys you into laughter. His vowels run seamlessly into his consonants, and his consonants, at times,  don’t even show up where you think they should.

But, whatever you do, do not judge Chief Baker by your personal view of what intellect sounds like.

The towering man speaking to you missed receiving the top score on his fire lieutenant written exam by 0.464 points. That’s despite the fact his entire educational experience was a real personal struggle. Chief Baker says so himself.

“I had challenges in my early childhood dealing with reading and English and math and speaking. Still today, there are some words I won’t try to pronounce.” It wasn’t the teachers, Chief Baker is quick to explain. He believes his parents’ divorce helped set him on a path.

Today, you have ADD and ADHD. Well, I had BAD

“I had some behavioral challenges. Today, you have ADD and ADHD. Well, I had BAD. My behaviors affected my grades.” 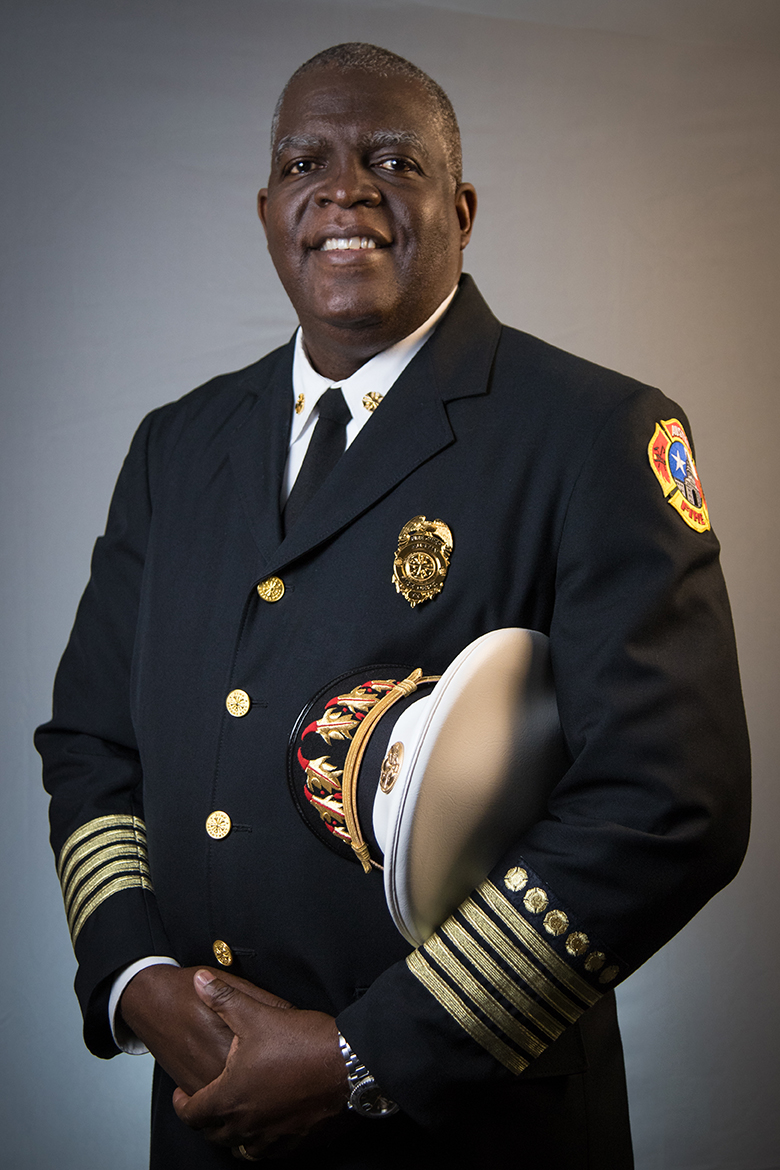 Chief Baker’s academic struggles would haunt him throughout elementary, middle, and high school. He tried, but his mind didn’t take to school like the minds of some kids. His mother made valiant attempts to keep him in line; discipline was as present as love in his home. But, Chief Baker never could excel academically. He managed to graduate high school, and one week later, he was in boot camp.

Joining the Marines would be the move which set the chief on a whole other path.

“It took me getting out of the Marine Corps and getting onto the fire department to take school seriously,” he says, “only because I wanted to advance and get promoted. I wanted to separate myself from the crowd. I knew academics was the way to do it.”

He was 23 years old. And, despite a childhood of scholastic “tomfoolery”, as he calls it, Baker would find his life’s calling — his intellectual prowess and cerebral, highbrow proficiencies — in service to country and community.

Chief Baker is a dynamic, living example to young people — particularly young, black students — who struggle in school; he symbolizes the kind of success that’s possible if you stay out of trouble and stay the course, even when every molecule in your body is beating against traditional academia.

After more than 30 years on the fire department in Atlanta, including serving as fire chief there, Baker is now Austin’s first African-American Fire Department Chief.

soulciti sat with Chief Baker to talk about his upbringing, his academic troubles, his new role, and the future of the city’s fire department.

Q. When you were a little boy, did you ever think you’d grow up to be fire chief of two major U.S. cities?

A. I didn’t imagine myself being a fire chief until about the age of 23 when I got on at the [Atlanta] fire department. When I was much younger, I had no desire to be a fire chief, doctor, lawyer, scientist. I just wanted to play cowboys and Indians. Ride my bike. Skate all day and all night. Play with my friends. Now that I have a child — my daughter who’s now 14 — we tried to coach and encourage her into professional careers. We would take her to her doctor, who is an African-American doctor. Her dentist is an African-American dentist. During black history month, we talk about the Tuskegee Airmen. We talk about slavery. We took her to South Carolina to slave plantations. We talk about Booker T. Washington. We exposed my daughter at an early age.

Q. What is your message to young children who struggle in school?

We’ve got to get back into the school system and assist those teachers with those behavioral issues and become mentors in our communities. I had some teachers who challenged me. The teachers really cared. They bent over backward for me. I can’t recall one teacher who didn’t care about my well-being.

Q. If you did so poorly in school, how were you able to become the leader you are today?

A. I wasn’t a terribly misbehaved student. I just acted out like any other 3rd or 4th grader. I didn’t steal or kill animals, chop heads off birds, or anything like that. I just had some challenges. But, the discipline I received — those disciplines kept me out of jail. Kept me from using crack or marijuana. It kept me on a straight and narrow path. When I graduated, I went into the Marine Corps which was one of the best decisions I ever made. That got my mind right overnight.

Q. Austin is only 8% black. Is that going to be a major adjustment for you coming from Atlanta?

A. I did my research on the city. There’s not a lot of African Americans here in Austin. I honor that. When I’m in the African-American community, I make sure I stop and say hello to everyone. I was in HEB on 7th Street, in uniform, and a young African-American lady walked up to me and said, “You’re the new Fire Chief!” I said, “Yes ma’am.” She said, “You’re shopping in the hood!” I laughed and said, “Yeah, I’m from the hood.” I didn’t think I was shopping in the hood. I was just going to the grocery store and this one because it’s closest to my house.

Q. How will you approach being a leader in the various parts of the city?

Q. What about diversity within the fire department. Is that a priority for you?

A. What diversity does for public safety is helps us develop ideas and new ways of thinking. Diversity is more than just skin color. It’s the diversity of various communities. Diversity in our training and educational, and background levels. It also ties into how we treat people and talk to each other. It’s a cultural thing as well. When I was on the fire department in Atlanta, whenever an African American would go to a resident’s home for a medical call, we would say “Ms. Smith” or “Ms. Jones.” But, the white firefighter would say “Joanne,” “Mary,” or “Sue.”

I don’t think the white firefighter meant any disrespect, but it’s a cultural thing. We knew in our communities not to call an elderly person by their first name. We just didn’t do it. Now, the millennial generation might call everybody by their first names. Diversity is good, not just because we want the fire department to reflect the community in which we serve, but we want that diversity to bring in a new way of thinking and operating, doing business, and making sure we enhance the culture that’s already here in the city of Austin.

I hit the Lotto when I got this job and I didn’t even buy a ticket.

Q. What are your priorities as you take on this new role?

A. (This answer is greatly paraphrased.)

Q. What are your personal goals for leading this city’s fire department?

A. I hit the Lotto when I got this job and I didn’t even buy a ticket. This is an excellent department. I really don’t have anything in my toolbox to make this department great, because it’s already great. But, I have tools in my toolbox to help keep that greatness on track. It’s my personal goal to be the last external fire chief. When I leave this career, there will be no reason for the City Manager to go outside of the Austin Fire Department. When I leave this place I truly believe the next fire chief can and should come from the Austin Fire Department, because I’m going to have them ready.