Black Women Who Kayak+ Founder Tanya Walker talks about the transformative experience of pushing boundaries and diving in – literally – with a group of eight Black women on a recent excursion to a hidden cave in Austin.
0

Whirlpool Cavern is nestled along Mopac Bridge going South and exiting William Cannon. Because this hidden gem is only uncovered by reservation, parking isn’t an issue here. Public access to it is restricted. It’s also unlikely that the untrained eye would notice this hidden cave since the iron rod shell above the entrance shields a 20+ foot drop into the abyss. The Whirlpool Caverns are owned by the Texas Cave Management Association, and this particular cave is labeled a beginner cave by the Austin Caver Community. Currently, the site is not operable because of COVID. However, when they do reopen. This is one of Austin’s hidden gems that you just don’t want to pass up.

Despite having no prior experience of what they were up against, seven other Black women and one man joined me pre-COVID on a trip to this amazing site. They allowed themselves to yield their movements, to be vulnerable and at the mercy of others, to explore, to touch, to be afraid, and more importantly, to count on one another. There was no phone service one we descended, so it was impossible to direct newcomers our way. We had on clothes we were told to discard; we also had helmets, headlamps, gloves, knee and elbow pads, water bottles, and snacks. 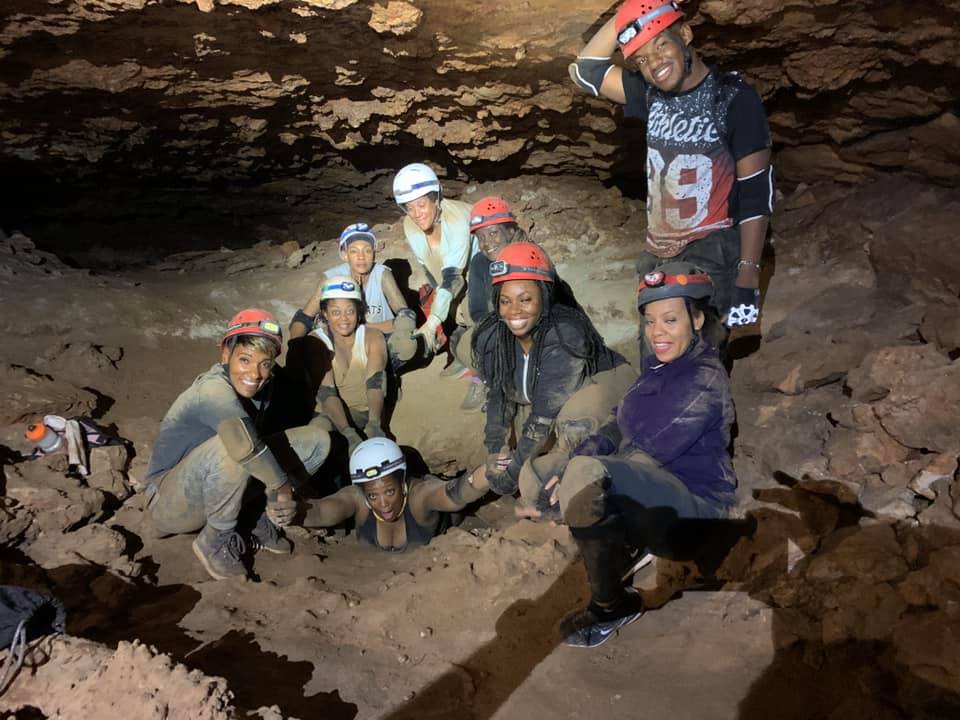 As we gathered, the Whirlpool Cave Volunteers gave us the information we needed and directed us as we descended 20 feet and deeper underground. It was explained to us by the volunteers that going down the stairs always makes it clear whether one can make it further. If you’ve ever been scared of the darkness, just know you’ll be swallowed by it. Three miles of darkness awaited us once we reached the bottom of the stairs, and we crawled through the wound of Mother Nature’s canals, slithered, shouted encouraging words, cried, doubted ourselves, got stuck at times.

We saw some of the most beautiful Metamorphic rock formations. In three hours, we had lost all recognition of our gleaming, clean smiles. But each of us made it out of the cave embracing an achievement we never thought we would’ve experienced. We became true revolutionaries, broke down a significant barrier, and shattered the myths of what people of color will and will not do. We learned more about ourselves and what we can do, and we grew as individuals – together – that day.

I can’t wait for the next outing, and the opportunity to continue pushing the boundaries on what society thinks Black women don’t or won’t do while meeting some amazing sistahs along the way.

Come join us, Sis, we’re waiting on you.

Tanya Walker is an Austin native, and owner, and founder of Black Women Who Kayak+, a group of outdoor enthusiasts and newbies dedicated to spreading their love and enjoyment of nature to Black women across the country.