The party of limited government in Texas has decided they can’t mandate masks in schools to keep children safe from a global pandemic that has claimed 4.5 million lives worldwide, 642,000 in the U.S., and more than 57,000 in Texas — but they can tell women what we can do with our bodies.
0

The U.S. Supreme Court refused to intervene to stop the state’s new six-week abortion ban, essentially overturning Roe v. Wade and setting up a constitutional firestorm over the new law that would allow women seeking an abortion after six weeks — including any physicians or medical providers who perform them, and even uber drivers who drive the women to the facilities to have one — to be prosecuted.

This shouldn’t surprise anyone. The Texas GOP is notoriously racist, and anti-abortion bills are rooted in White Supremacy. From the ACLU, which led the petition to the Supreme Court to overrule Texas’ new heartbeat law:

Black women are three times more likely to die from pregnancy-related causes than white women, according to the Centers for Disease Control and Prevention (CDC). In Texas, the maternal mortality rate is already higher than the national average, and Black women are disproportionately represented, accounting for 11% of live births and 31% of maternal deaths in the state. We account for 12.% of the state population.

(As an aside, I didn’t even know I was pregnant with my first child until she was nearly eight weeks in utero. My mom continued to have a menstrual cycle for four months after she got pregnant with my sister, and could almost tell the gender by the time she knew she was pregnant.)

The law is one of 666 new laws that took effect in Texas this week (does anyone else see the ominous foreboding here?). There’s a collection of voter registration bills — not S.B. 1, the most egregious one that just passed this week and still awaits the governor’s signature — but other bills that make it harder to apply for mail-in ballots and cut funding to voter’s registrars.

The infamous S.B. 3 banning critical race theory and any accurate teaching of U.S. history, and laws that would make it a felony for protestors to block roadways leading to hospitals also took effect. So did the new permitless carry bill, which allows anyone with a gun to carry it in public. Homeless encampments are now banned, and violators can be charged with a misdemeanor and assessed a $500 fine. 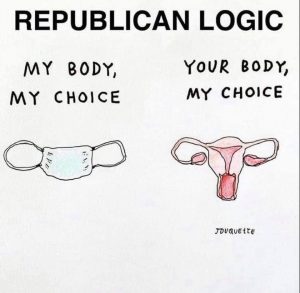 While focusing on limiting participation in democracy and minding women’s business, the legislature did not make any attempt to enact legislation that would remedy any of the injustices faced by Black Americans that led to the record voter turnout the Grand Ol Plantation owners are trying to suppress; neither did they pass any bills to provide for the support or general welfare of children birthed as a result of the new heartbeat bill.

In fact, legislators this session declined to make any expansions to state or federal healthcare coverage and continues to reject expanded federal funding for healthcare coverage. Texas has long had the highest uninsured rate in the country, and despite the pandemic’s exacerbating effects, state leaders continue to prove that the health and well-being of its residents are not their problems.

This is why elections are so important. Presidential elections have consequences for judicial appointments — Donald Trump appointed three Supreme Court justices, 54 appellate court judges, 174 district court judges. Judges are responsible for overruling the foolishness of the legislature and executive branch, i.e. the crazy governor. Local elections have implications for policies like the ones that take effect this week, tax rates, and decisions made in schools. Every vote matters — that’s why they’re working so hard to suppress yours.

Remember all of these things when it’s time to vote these crazies out.